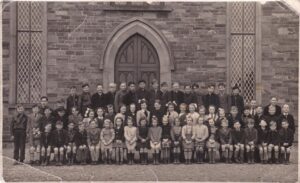 Little is known about early educational provision in the Bready area. Some of the churches in Donagheady parish provided some basic schooling, but convenience and cost limited the number of children able to avail to these facilities. A parliamentary report of 1826 found three schools operating in the Bready area. In Coolmaghery David Langwille, a Presbyterian (probably a Reformed Presbyterian), held a school in a barn and had an income of £7 a year from teaching. He taught around 50 pupils. In Tamnaclare William Curran, a Catholic, held lessons in a thatched cabin, and earned £15 a year from teaching. There were only 25 pupils in his class. Similarly Coll. McDonnell, also a Catholic, taught 25 children in a small cabin in Drumgauty. This he rented for £1 2s. 9d. per annum and he too earned £15 a year from teaching. Nothing else is known about these schools and for how much longer they continued to operate is not clear.

The first reference to Bready school comes from 1834 when in October of that year Joseph Hamilton began to teach lessons there under the patronage of the Marquess of Abercorn and received from him a salary of £5 per annum. The rector of Donagheady parish was also supposed to pay Hamilton £3 every year. However, the rector, the Honourable the Reverend Charles Douglas was somewhat lax with his payments, and his subscription of May 1837, which was not actually received until February 1838, was his last. Apart from the £5 he received every year from the marquess, Hamilton’s income was based on payments he received from his pupils, some of whom paid him one penny per week or two shillings sixpence every quarter. Quite often these payments were made in kind. For example, in 1849, half a ton of turnips cancelled an account of seven shillings. Hamilton supplemented his income by conducting night classes.

On 1 October 1869 new teachers took over responsibility for Bready school: Samuel Russell, the principal, and his wife Mary Jane. Registers of pupils survive from this time and an index is available online at www.breadyancestry.com. These registers provide the names, ages and religion of the children as well as the fathers’ occupations, but unfortunately not their names. Most of the pupils were the children of farmers and labourers, but other occupations listed included fisherman, Inspector of Fisheries, carpenter, painter, horse dealer, blacksmith, shopkeeper and clergyman. The Russells left Bready in January 1879 and Robert Fullerton took over as principal. He continued until 1905 when Thompson Hunter was appointed principal.

During Mr Hunter’s time the school was transferred to the state under the terms of the Education Act (NI) of 1923. On 6 April 1926 Strabane and Castlederg Regional Education Committee accepted the proposal from the school’s manager, Rev. F. W. C. Wallace, that they take over responsibility for Bready. Soon after this plans were made to build a new school on the same site, but at right angles to the old one. Work on demolishing the old school began on 18 February 1929. While the new church was being built classes were held in the Orange Hall in Bready.

During the Second World War the school experienced a brief surge in numbers as evacuees from Belfast arrived in the Bready area. Mr Hunter retired in 1942 and was succeeded in February 1943 by John Turner. In 1948 a kitchen was added and mid-day meals were provided to children. In 1951 an electricity supply was brought to the school and soon afterwards mains water. In 1959 a quarter of an acre adjoining the school, was acquired from the Lowry family as a sports field. Also in 1959 a new infant classroom was built. It was not until local secondary education was provided in 1964 that the school ceased to cater for children in the 12-15 age category. Mr Turner retired in 1971 and was succeeded by Edwin McKerr. In 1978 a new dining / sports hall with indoor toilets was opened. Mr McKerr was succeeded as principal by David Canning in 1985. He in turn retired in 1991 and Mrs Roberta Shannon took over.

On 31 August 2002 Bready Primary School amalgamated with nearby Sandville Primary School. The latter school had originally been under the control of Donagheady Presbyterian Church, but was transferred to the Strabane and Castlederg Regional Education Committee after 1947. In 1961 a new school building was opened. The numbers of pupils at Sandville had been falling for some time forcing the school’s governors to give serious consideration to the future of the school. Sandville Primary School was closed and the pupils transferred to Bready. From that time on the school was known as Bready Jubilee Controlled Primary School, the name reflecting the celebration of the Queen’s Jubilee in the year of the amalgamation. In the same year funding of £1.3 million was made available by the Department of Education to build a new school at Bready on a site immediately behind the existing building. The work was completed in the summer of 2004. The new school comprised five classrooms with adjoining resource areas and an assembly hall named the Sandville Hall. It was officially opened by the Duke of Abercorn KG on 23 June 2005. Mrs Shannon retired as principal in August 2005 and was succeeded by Mrs Helen Cole.

At one time there was also a school in the townland of Grange Foyle. From January 1826 we have a deed covering the transfer of a plot of land in Grangefoyle from the then owner of the former abbeylands, John Hutton of Summerhill, County Dublin, to the bishop of Derry and the rector of the parish of Donagheady. The following is a brief abstract of the deed: ‘[John Hutton] for the purpose of establishing a school with the … approbation of the said Lord Bishop in consideration of five shillings taken in hand paid by the said minister of the parish of Donagheady .. did grant, bargain, sell, alien, release and confirm unto the said minister … all that plot or piece of ground being part of the lands of Grange … at the yearly rent of one penny … [the] schoolmaster to teach and instruct all such children as should be sent to him for that purpose in the principles and practice of reading and writing the English language and of arithmetic …’.

When responsibility for the school was transferred to the Commissioners for National Education in the late 1830s it became known as Donagheady National School. The school building was designed to incorporate a teacher’s residence within its walls. The last teacher at the school was Mrs Johnston who taught there for some forty years. She had such a good reputation that children were sent to her from beyond the school’s natural catchment area. This school closed on her retirement on 31 December 1925. The present building is now divided into two private dwellings.