The Bready area is not rich in prehistoric remains. Two reasons account for this. Firstly, the low-lying area along the River Foyle would have been covered in dense forest in earlier times, militating against significant human settlement. Secondly, this area has been intensively farmed in the last three hundred years and, consequently, many monuments have been lost. However, there are enough monuments in the countryside to indicate to us that people were living in the area several thousand years before the birth of Christ. Farmers living along the Foyle have picked up pieces of flint from their freshly ploughed fields, dating from perhaps 5,000 or more years ago. 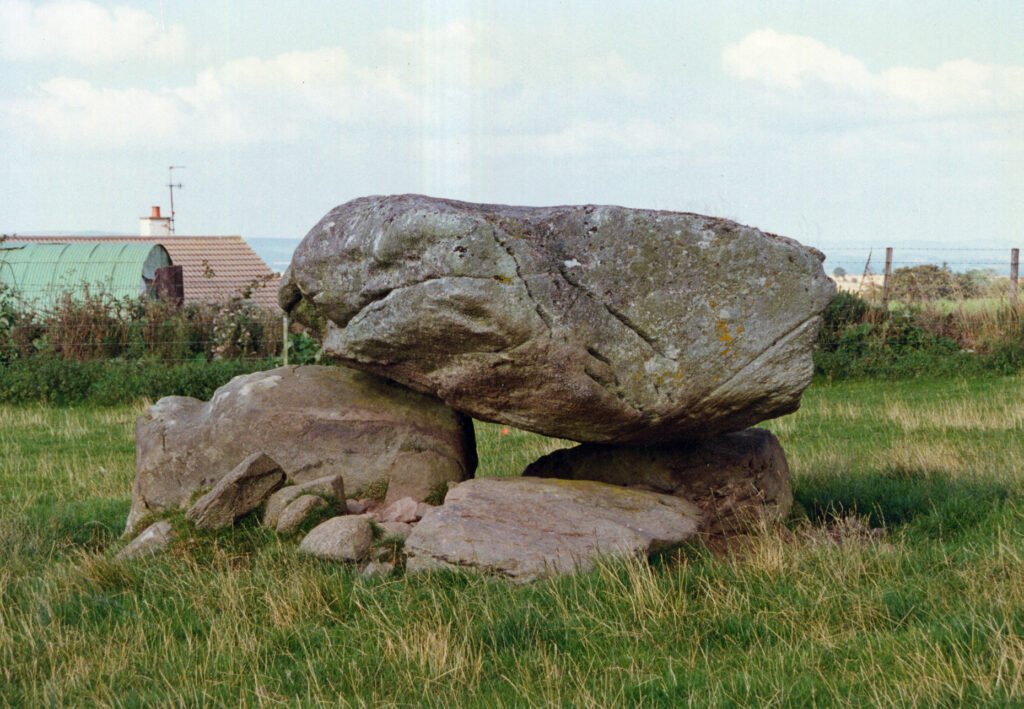 The early inhabitants of Ireland buried their dead in tombs which have been termed megalithic because they were constructed with large stones. One of the best known megalithic tombs in this area is the ‘Rocking Stone’, a collapsed portal tomb or dolmen which is situated in a field close to the main road between Artigarvan and Dunnamanagh. At the top of Windy Hill are the remains of a wedge tomb, so named because of its wedge shape.

A small simple grave or cist, dating from the Irish Bronze Age (c.2,200-500 B.C.) was discovered in Sandville in 1953. The cist was found to contain the skeletal remains of a human being and a small food vessel. Analysis of the bones showed that they probably belonged to a young man just over five feet tall. It has been suggested that the style of the bowl is derived from a Scottish source. If this hypothesis is correct it is an indication that close links between Scotland and this part of Ulster are of some antiquity.

Standing stones were also a once common feature of our landscape. However, many have since been removed, including one in Cloghboy. In the boundary fence between the townlands of Lisdivin and Sandville is a pair of standing stones probably indicative of phallic worship. It is believed that livestock were driven between these stones in order to ensure their continued fertility. 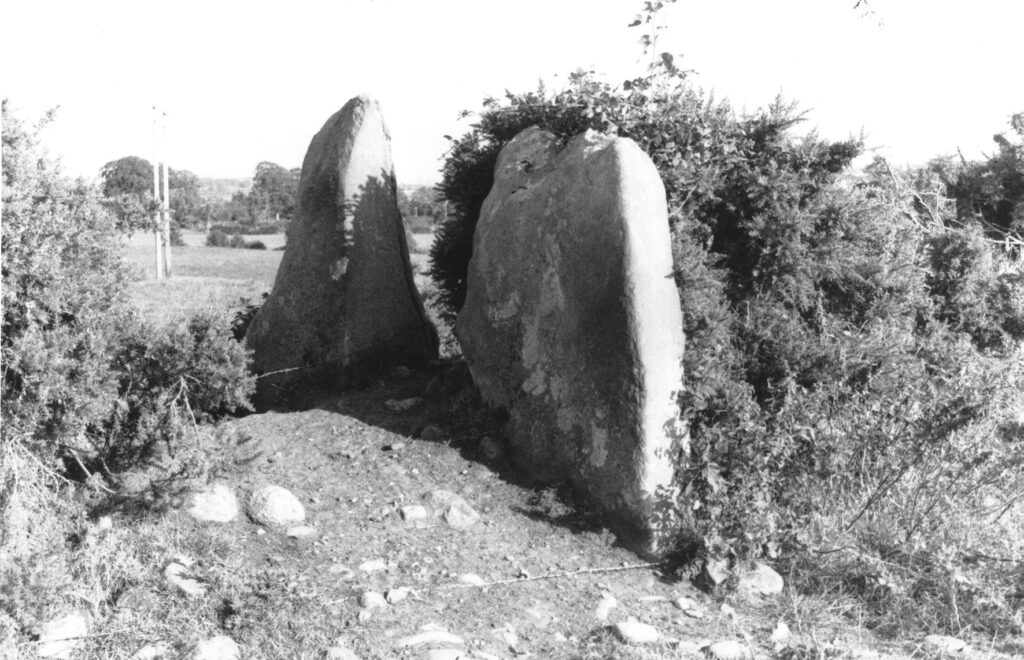 At several sites there are souterrains – artificial underground chambers lined and roofed with stone. In the 1938 edition of the Ulster Journal of Archaeology Professor V. P. H. Moore gave an account of a visit to the souterrains in Ballybeeny:

They are set into a fairly steep slope, and are about 150 yards apart. The easterly one is at present inaccessible; into the western it is possible to penetrate, though it is partly filled with earth. One side is roughly cut in the rock, the other is built up of rough boulders; for it is constructed in the boulder-clay along the slope, and so did not need to be built on both sides. The outer part consists of a passage less than two feet wide and at present about 2½ ft high with two right-angled turns, at the second of which there projects a shoulder of rock. At 8 ft from the mouth there is a lintel-slab, leading to the chamber, which is considerably higher than the passage; its original height was about 7 ft. It is roofed with slabs set without order. In shape it is roughly oval, about 11 ft long and 4 ft broad at the widest part. Two passages run off to the right, towards the ground surface; they are now nearly filled with earth, and probably were niches and did not communicate with further chambers. 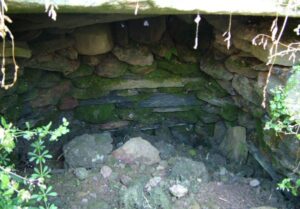 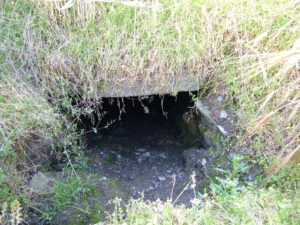 Recently another souterrain was discovered in Cloghboy. During ploughing a lintel stone was dislodged revealing a small chamber approximately 3 m long and 1 m wide. A small creep connected this chamber to a passage blocked roughly 3.5 m along its  length by a soil deposit.

This souterrain had lain hidden for perhaps 1,000 years. Souterrains were principally used as places of refuge during times of unrest. It is recorded that the Vikings sailed up the Foyle on a number of occasions on their marauding journeys. It has been suggested that Dunnalong may originally have been a Viking settlement since the ‘long’ is reminiscent of the Norse longphort, a term used to describe a Viking encampment. 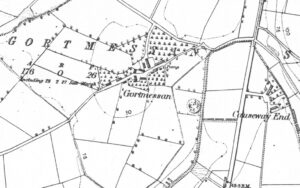 Raths or ringforts are circular enclosures, which date from the first millennium A.D. The most impressive rath in this area is located at Ballynabwee and is set on a bluff 100 feet above the Burndennet River. A double-banked rath, the diameter measures between 40 and 45 metres. In places the inner bank rises nearly two metres above the central, enclosed area and appears to have been constructed in part with stone revetments, as does the outer bank. The entrance is on the south-western side and is approximately two and a half metres wide. Among the earliest identifiable tribes in this area was the Ui Meic Cairthinn whose territory covered the western part of what is now County Londonderry and stretched south to the Mourne and Owenkillew rivers in County Tyrone. The ringfort at Ballynabwee, along the Burndennet river, was probably one of their principal fortifications.

Another rath, since destroyed, was in the townland of Gortmessan close to Bready.

In the medieval period an Augustinian abbey was founded at Grange. The name Grange itself throws some light on the nature of the abbey, since the word is generally used to describe a monastic farm. The principal preoccupation of the abbey at Grange was probably with supplying grain to the main Augustinian abbey in Derry. There was also a small chapel on the abbeylands, which would have served as the place of worship for both the monks of the monastery and the local inhabitants. Today, there are no remains of this monastery, which would probably have been located within the confines of the present burial ground. Taylor and Skinner’s Maps of the roads of Ireland (1777) and the Post Chaise Companion (1803) record the ruins of a church at Grange. In 1837 the ruins were described as ‘extensive,’ though they are not marked on the 1st edition Ordnance Survey map of the area.

Holy wells in the area include one at Peter’s Hill in Tamnabryan and another close to Old Donagheady graveyard. A further holy well was located in the townland of Killycurry on the other side of the Dennett from the old bleach mill. The 1858 Ordnance Survey map of the area marks three antiquities here: ‘Fort Field’; ‘The Font Stone’; and ‘Site of Burial Ground’. This would appear to have been another early ecclesiastical site about which nothing is known. A further holy well was at Rosnagalliagh, close to the main road between Magheramason and New Buildings. In 879 Ailid McDermott founded a nunnery in this townland. Nothing remains of it now, though at one time there was said to have been an extensive graveyard at the site.