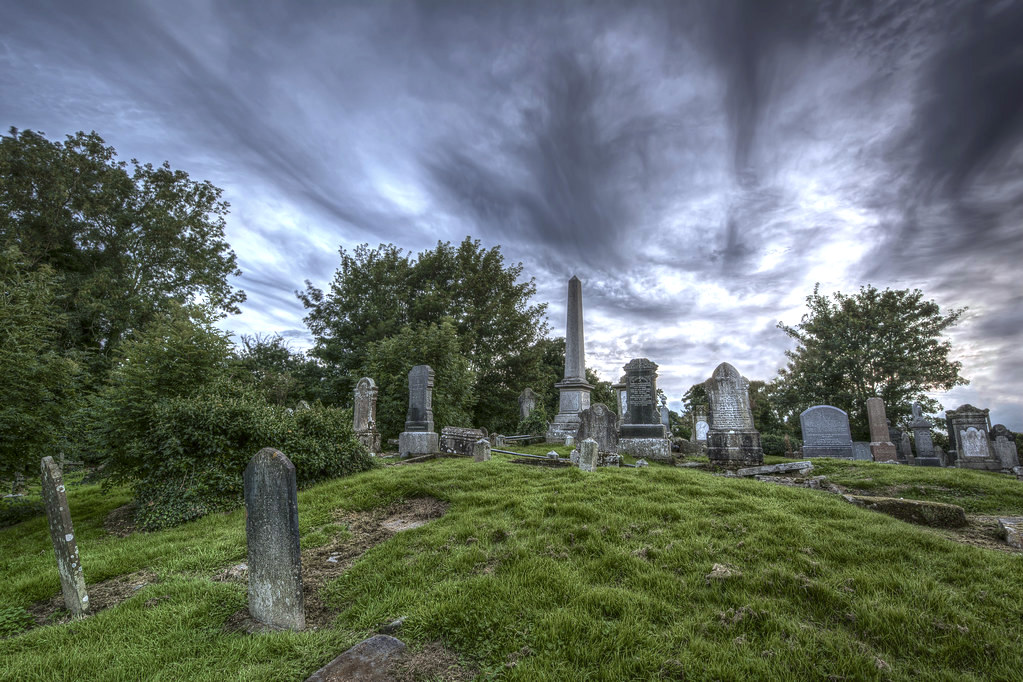 Grange graveyard is a small and overcrowded burial ground close to the village of Bready, about 6 miles north of Strabane. It is located in the townland of Grangefoyle. Adjacent to the graveyard is Grange House, a private dwelling in the Georgian style, and a range of mainly dilapidated out-buildings. The River Foyle flows in a northerly direction a few hundred metres to the west of the graveyard. Much of the land between the river and the graveyard was reclaimed in the nineteenth century. Grange Graveyard is a wonderful place to study the history of the Bready area.

History of the graveyard

The background history of Grange is covered in the section looking at the archaeology and early history of the Bready area, but, briefly, this was the site of a medieval Augustinian abbey. It is not known when precisely the abbey at Grange finally closed, but it was almost certainly before the end of the sixteenth century. In the early seventeenth century the lands belonging to the monastery at Grange were granted by the Crown to Sir Ralph Bingley, an English army officer and land speculator. They were later purchased by Hugh Hamilton of Lisdivin, a Scottish trader in luxury foodstuffs. In 1638 the southern portion of the former monastic lands was detached from the rest and granted to a kinsman of Hugh Hamilton, confusingly another Hugh Hamilton. This portion was named Drummeny, with the northern part continuing to be called Grange.

Grange remained in Hamilton hands for the rest of the seventeenth century and for the whole of the eighteenth. In the early nineteenth century it was purchased by John Hutton of Summerhill, Co. Dublin, who leased it to the McCrea family. In the nineteenth century the name of the townland was changed from Grange to Grangefoyle.

In the middle of the nineteenth century a new wall and arched gateway were constructed, probably using the last of the stone from the old monastery on the site. The square keystone of the arch is inscribed as follows: ‘This wall and gate | rebuilt by the | owners of ground | within | A.D. 1865’. It is not clear who these ‘owners’ actually were. Perhaps they were people who had burial rights in the graveyard. On 10 July 1934 Strabane Rural District Council, in response to concerns about overcrowding, unanimously agreed to close the graveyard. The graveyard was officially closed from 1 January 1938, though families with existing burial plots could claim an additional number of interments.

As a burial site Grange probably dates back over a thousand years. While there is a local tradition of monks’ graves in the graveyard or its immediate vicinity none can now be identified. The oldest surviving gravestone in Grange graveyard commemorates Robert Granger who died in 1630. In 1617 a Robert Granger of the manor of Dunnalong was granted denizenship. This allowed him to carry out legal transactions and pass on property to an heir through a will. In a document of 20 September 1626 a Robert Granger who lived at Cloghboy in the manor of Dunnalong is mentioned. It is likely that we are dealing with the same man here. The stone features a heraldic shield bearing three stags heads indicating the status of the deceased.

The majority of people buried in Grange were in some way connected with farming. However, a few of those commemorated in Grange pursued other careers as well. According to his gravestone, David Ramsay, who died in 1811 aged 28, was a merchant in the city of Londonderry. Several doctors and surgeons are buried in Grange. William Nesbitt MD who died in 1825 aged 71 had been for ‘many years surgeon in the Royal Navy’. James Alexander who died in 1811 had also been a surgeon in the Royal Navy. The gravestone to Andy McCrea of Magherareagh who died in 1822 aged 22 states that he was a linen draper. Several Presbyterian or Reformed Presbyterian ministers are commemorated on memorials in Grange. William Gamble who died at Portadown in 1906 had been a former Head Constable of the Royal Irish Constabulary.

The only military headstone in Grange is to 545 Sapper J. Dougherty. It features a maple leaf cut in relief and an incised cross. Dougherty served with the Canadian Overseas Railway Construction Corps. He was the son of William and Jane Dougherty (nee Thompson), of Tully, New Buildings and the husband of Lizzie Dougherty, of Tamnakeery. The precise circumstances of his death are not known.

Emigration was very much a feature of life in the Bready area and not surprisingly several of the inscriptions in Grange have overseas connections. William Jarvis erected a stone to the memory of his son Andrew McIntyre who was buried in Oakwood Cemetery in Chicago, USA. George Love, the only son of Lindsay and Elizabeth Love of Gortivea, died in Canada in 1935, but is commemorated on a headstone in Grange.

George Clarke, a doctor in the Royal Navy, died in 1858 and was buried in the cemetery of Montpernasse in Paris. Andrew Clarke of Belmont in Clonleigh parish, Co. Donegal, who lies buried in Grange had been a member of council and brigadier general of the militia forces in the island of Trinidad in the West Indies. Two of the children of William Young of Cloghboy died abroad. Margaret Elizabeth was buried in Brighton in 1894, while James drowned in New Zealand in 1888.

Three stones in Grange bear mortality symbols. These include a skull and crossed bones together with a bell, hourglass, coffin and spades. The three gravestones have the appearance of being the work of the one mason. On two of the stones the inscriptions have completely disappeared. On the third the date 1741 can be read and with some difficulty and a little imagination the name Hamilton is faintly discernable. A few gravestones in Grange bear the exhortation: ‘Memento mori hora fugit’ which loosely translated from the Latin means, ‘Remember you must die; time flies’. This expressed in words what mortality symbolism communicated visually.