Townlands are unique to Ireland and are among the earliest land divisions in the island. How they originated is not known for certain. For centuries they were important as the smallest administrative unit in Ireland. Townlands were also vital as markers of local identity for individuals and families. It is only in relatively recent times that they have been superseded by road names and house numbers. Nonetheless townlands are an important part of our heritage and ought to be preserved and valued. With this in mind, Bready Ulster-Scots and District Development Association successfully applied to the RDC under the EU Programme for Peace and Reconciliation (Peace II) for funding for a project to erect name stones at the boundaries of townlands along the public roads in the area. Townland names would thus be preserved and future generations would be aware of their existence and value to the local community. 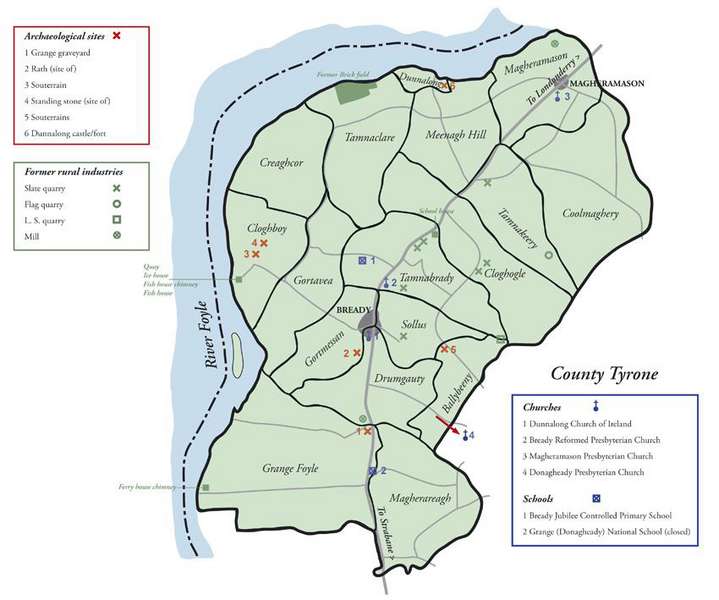 This project encompasses seventeen townlands in the Bready area. The names of these townlands, together with their meanings, are:

It is significant that many of the townlands have meanings which reflect farming activity, an indication of the agricultural productivity of the land in the Bready area. The name Bready is a shortened version of the name Tamnabrady, though the village of Bready, despite its small size, is spread between several townlands: Drumgauty, Gortmessan, Sollus and Tamnabrady.

The earliest map showing the townlands of the Bready area dates from 1609 and was part of a series of maps drawn under the supervision of an English official in Ireland, Sir Josias Bodley. These maps were produced following interviews with prominent men in each locality and not actual measurement.  The principal aim of the surveyors would seem to have been to locate the townlands in relation to each other and also with relation to the principal rivers with some sort of indication as to where the mountains and forests were situated. With regard to the Bready area, many of the townland names are easily identifiable to-day and there are a number of other features depicted on the map of this area which are of considerable interest.  These include the fort at Dunnalong, the abbey at Grange and a small fort along the Burndennet river.

Almost all of the townlands in the Bready area originated in the pre-Plantation period even if their boundaries were not firmly established until after this. The one exception is the small townland of Dunnalong. This townland, extending to just under 30 acres, was originally part of Menagh Hill. The Civil Survey of 1654-6 recorded that ‘Michaell Marshall, Scottish Protestant, claymeth a fee farme of a tenement house garden and Malltbarne with a parcell of grounde adjacent, estimate three acres, with grass for three Cowse’ in Menagh Hill. This holding had been leased to Marshall by Sir George Hamilton, probably in the 1630s. It would appear to have been purchased by the Lynn family of Cloghogall some time after this as it is referred to as ‘Lynn’s tenement’ in an early eighteenth-century document. Later in the eighteenth century it was bought back by the 8th Earl of Abercorn. Spellings of townlands varied considerably until they were standardised at the time of the Ordnance Survey of around 1830.

In addition to townland names, there have been various other names for places within the Bready area that have not been officially recognised, but which deserve recording. These are chiefly derived from the Ordnance Survey maps. A list of them is given below.