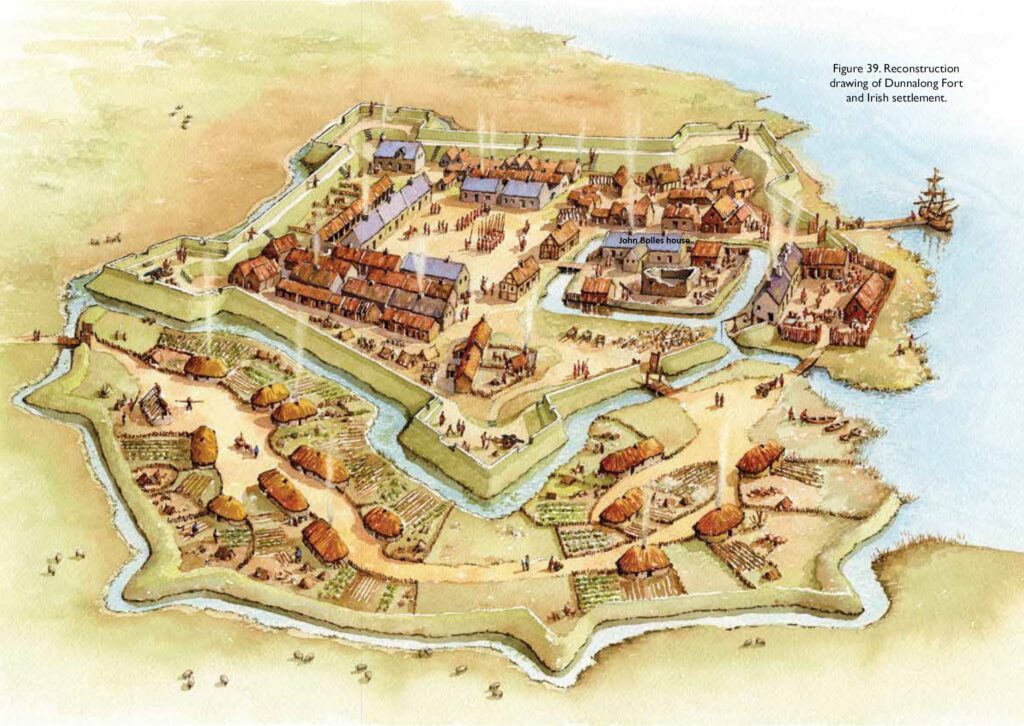 The Ulster Plantation was an ambitious scheme of the early seventeenth century in which lands confiscated from Irish chieftains were granted by the government to English and Scottish lords. These lords were required to introduce settlers from their homelands to their estates. Under the Plantation scheme the most of the townlands in the Bready area were granted to James Hamilton, 1st Earl of Abercorn, a Scottish aristocrat with close ties to the royal family. The townlands he possessed in the Bready area formed part of the manor of Dunnalong (or Donelong). The Earl also owned lands around Strabane and was responsible for founding the modern town of Strabane. The 1st Earl died in 1618 and the manor of Donelong eventually passed to one of his sons, Sir George Hamilton. On Sir George’s death in 1679 the manor was inherited by his grandson James. Although an officer in King James’ army, this James Hamilton defected to the side of William of Orange, and assisted the defenders of Derry during the siege of 1689. In 1701, on the death of his cousin Charles, he became 6th Earl of Abercorn.

As lords of the manor, the Abercorns were permitted to hold a fair at Dunnalong on the first and second days of August every year and to appoint a clerk of the market. They were also allowed to have a ferry across the River Foyle at Dunnalong and to charge fees for passage. In addition they could build a tannery in the manor. Their tenants were expected to live in hamlets, but this did not happen and no nucleated settlement ever developed in the Bready area during the Plantation. The manor of Dunnalong was given the nominal acreage of 2,000 acres, but in reality it was more than 10,000.

The progress of the Plantation

Information on the progress of the Plantation in the manor of Dunnalong comes from two principal sources. The first was an investigation carried out by Captain Nicholas Pynnar in 1618-9.  To begin with, Pynnar noted that at Dunnalong there was ‘neither Castle nor Bawne’. However, the tenants had built three or four houses of lime and stone. The total number of tenant families on the estate was twenty.  These tenants, together with their undertenants, brought the total number of adult males capable of bearing arms on the proportion to 106.

The second important source of information on the Plantation in this area is a survey carried out in 1622. The most important change since Pynnar’s investigation, was the appearance of a ‘good Castle of stone & lyme, 3 stories high … and about a Bawne 54 foot long, 42 foot broad and 6 foot high, with two open Flanckers’.  This castle was obviously begun some time after Pynnar’s survey and the fact that it was noted as being uninhabited as well as there being no gate to the bawn (the name given to a fortified enclosure surrounding a castle) would seem to indicate that it had still not been completed.  The partial ruins of this castle can still be seen in the modern townland of Mountcastle. What survives was probably part of the bawn wall. The most noticeable feature of the ruins is the moulded corbelling which is a particularly Scottish feature.

While the official report can be used to gauge reasonably well the progress of the Plantation in the manor of Dunnalong, a wealth of additional information is contained in the certificate presented by William Lynne, agent to the Abercorns, to the commissioners appointed to investigate the Plantation.  This certificate firstly listed the names of the freeholders and the acreages they held, followed by a list of the names of the leaseholders and, finally, a description of the buildings found in the proportion.

In addition to the castle, Lynne noted that three of the freeholders had built houses of stone. Most of the leaseholders had also built houses of stone, while the rest had built ‘houses of cuples’, a term which seems to mean that the houses had inclined rafters.  Furthermore, the proportion now had a stone water mill where the tenants could grind their corn.  A ‘good quay built this year’ was also recorded in the certificate, while a ferry with ‘sufficient boats for men and horse’ was mentioned as well.  The indication is quite clear that the ancient river crossing over the Foyle between Dunnalong and Carrigans in Donegal continued in importance.

Several early leases for lands in the manor of Dunnalong survive. In 1612 a Hugh Hamilton was leased Moyagh. In 1614 William Lynne of Londonderry was leased Cloghogle. Under the terms of his lease Lynne was required to build within four years a ‘good and sufficient house of stone and lime or stone and clay with windowes and chimneyes after the form of Scottishe buildings’. He was also expected to have in readiness in his house one musket and two lances and he was to keep two men armed with lances and musket. A third early deed was a grant of Lisdivin to another Hugh Hamilton in 1615. This man was also a merchant in Strabane. For Lisdivin Hamilton was required to pay either £6 in cash or one hogshead of Gascony wine, one pound of good pepper, four pounds of loaf sugar and a box of marmalade containing at least two pounds of the preserve.

The following names of early settlers are taken from the certificate presented by William Lynne to the commissioners appointed to investigate the progress of the Plantation in 1622.

The initial period of the Plantation ended with the Rebellion of 1641 when Irish lords rose up against the government and take back what they believed was rightfully theirs. No information on precisely what happened in the Bready area has survived, but presumably as elsewhere some of the settlers would have been killed, while others would have fled for refuge to Derry and then perhaps back to Scotland. Mountcastle was destroyed and not rebuilt. However, by the late 1650s the manor was beginning to show signs of recovery. There was a Presbyterian minister working in the area and records from the 1660s show that the townlands were once again settled by migrants from Scotland. The continued migration of Scottish families to the area has given it the strongly Scottish flavour that continues to this day.